In the spirit of the article, I would like to suggest an improved Peppa Pig episode that could be used to convey more realistic expectations, encourage safe self-management and use primary care services more effectively .

Parents call Dr Brown Bear on a Saturday regarding an 18 month old piglet with a 2 minute history of coryzal symptoms after playing outside without his rain hat.

After examining the throat, he diagnoses an upper respiratory tract infection and advises bed rest and warm milk. Symptoms resolve within 12 hours.

George Pig has a fever and is grumpy as hell. Mummy Pig knows the score from previous experience. She checks the NHS website just to be sure, and notes George has none of the concerning signs that would suggest she needs to seek further medical advice. 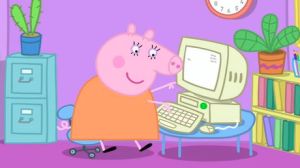 She goes to the local pharmacy and has a constructive conversation with the pharmacist, and is given some pink medicine for George Pig. She goes home and attempts to syringe some pink medicine into George Pig’s mouth until roughly equal quantities of medicine have gone into George, on the carpet and in Mummy Pig’s face.  George Pig is eventually only placated by bottle and daddy’s smartphone, and doesn’t want to sleep for more than 20 minutes at a time unless he is in Mummy Pig’s arms and being rocked. 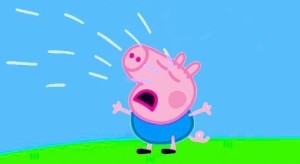 After 2 days of no sleep for anyone Mummy Pig phones the GP surgery to get an appointment with Doctor Brown Bear. She is told that there are no appointments available today, but if it’s urgent she can take him to an out-of-hours service, and if he deteriorates then to call 999. George Pig continues to be grouchy all evening and showing no signs of wanting to settle, so just to be on the safe side, Daddy Pig takes him to to out-of-hours service whilst Mummy Pig does Peppa’s bedtime.  Daddy Pig waits for 2 hours in a waiting room full of screaming baby pigs and finally sees a slightly frazzled Doctor Brown Bear at 9:30pm. 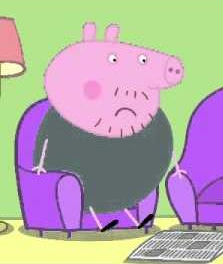 Doctor Brown Bear does the best he can with 10 minutes, checks out George Pig, advises Daddy Pig that it’s probably an ear infection which will get better in a couple of days, advises Calpol and to come back if things get worse, and offers sympathy. He says that antibiotics don’t make much difference, can cause side effects and we should all be using less of them in case they become less effective in the future.   Daddy Pig says that he’s read the evidence base and acknowledges that whilst sketchy, if there’s even the remotest possibility antibiotics might reduce the duration of symptoms by about half a day,  he is willing to sacrifice the future of medicine for current and future generations for things to finish 12-24 hours faster.  He also expresses a concern about the waiting time for future appointments if things do get worse. Doctor Brown Bear offers Daddy Pig a delayed prescription to use if things don’t get better soon, which Daddy Pig takes to the Pharmacy only to find it has already closed for the day.

Daddy Pig returns home around 10pm; George Pig falls asleep in the car and is out like a light for the next 12 hours. Mummy and Daddy Pig finally collapse exhausted into bed and get two hours of rest until they are woken up by Peppa who feels bad and now has a fever. Mummy Pig goes to get the magic pink medicine for Peppa, who refuses to sleep anywhere other than their bed and proceeds to steal all the blankets and kick them repeatedly all night. By the morning Daddy Pig has lost the antibiotic prescription, Peppa is refusing to go to school, and George Pig is now gunning it round the house and has thrown dine-saur in the loo. 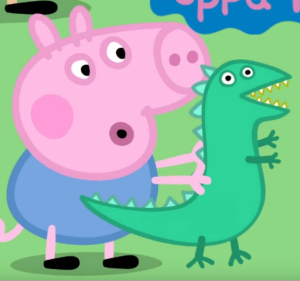 Disclaimer: I don’t own Peppa Pig or the NHS