A lovely little case report has just come out in AAC, about a patient with pretty terminal multidrug-resistant Acinetobacter baumanii infection being treated with a cocktail of bacteria-destroying phages.

I like to hear little radio reports from planet phage every now and then, as I do get asked  about them quite a lot when talking antibiotic apocalypses. 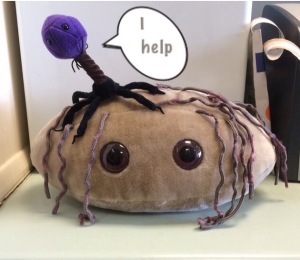 It’s well worth a read for those who want a quick insight, as it’s like a microcosm of the phage therapy world all in one patient – all the hopes, limitations, concerns, all in a very nicely written article.

Clever science? tick. Phages being inactivated by the patient’s own body? tick. Development of resistance by the bacteria? tick.  But also… possible clinical effect in someone with few options, and an excellent discussion about synergy between phages and antibiotics, Which I think boils down to ‘if you hit it with enough things simultaneously it goes down eventually’.

In short, a chap in ICU with A. baumanii pancreatic pseudocyst and other intraabdominal infections was getting worse- progressive renal failure, pressor requirements increasing, unconscious…

They isolated the A. baumanii, and then two groups tried out their environmental bacteriophage libraries on it.  They found a number of active phages, which worked better together than in isolation, and concocted two ‘phage cocktails’ which were administered into the cysts/collections via drains, and later injected intravenously.

In the following 48hrs he perked up quite a bit, treatment was continued, and he was followed for a number of months. They found that minocycline might be worth a try, and indeed, it seemed to work synergistically with phage therapy. They speculate that whatever adaptive mutations allow A. baumanii to resist antibiotic or phage makes it harder to resist the other. And adaptation to try and survive may attenuate the strain, reduce virulence, and allow the patient to improve.

However -A. baumanii isolates after a few months of  phage therapy had become resistant to the phage cocktail. They found a new phage and added it in. (It worked better as a cocktail than on it’s own – again a sign that even if the first phages weren’t killing any more, they were still causing A. baumanii some bother).

The authors are pretty open about the fact that his improvement could have been nothing to do with phage as he was already on a cocktail of antibiotics (though these hadn’t stopped him deteriorating before).  They have a decent discussion at the end about concerns (especially phage-mediated horizontal gene transfer) and future directions.

It’s worth noting that this sort of personalised treatment, whilst cool, would also be seriously expensive. Though conversely there’s a huge amount of money going into personalised cancer treatment, and perhaps the comparisons are apt. Chronic, relapsing infection with an XDR organism is fairly terminal and, without decent treatment options, the clinical situation is not unlike many forms of cancer. I wonder if in years to come,  this may be how we start seeing near-untreatable infections: something to control, not cure, with the aim of  antimicrobial therapy (antibiotic/phage/intervention) to buy not resolution, but time.